Did you just seem them on weekends or how did you work that out? Was your wife working at the time?

Sorry to ask all these questions but I can't get my head around all the logistics of it if we split up. These things are certainly complicated! And I'll admit I didn't even think about these things when I came out. It was just what I had to do. When we first separated I stayed with friends for about 6 weeks while I found a place and stuff. During this time, I went round for dinner most nights and helped tuck the kids in to bed. On one or two of the weekends I took the kids down to stay at my parents place in the country. Since then we have had a pretty stable routine. I had Friday off every second week, and on that week had the kids from Thursday night through to Monday morning.

The other week I just had them Thursday night. But we also established a "date night" thing which is that once a fortnight one of the kids and one parent do a date night, which depending on age and circumstance might mean take-away pizza and a movie, or going out for burgers, or a documentary at IMAX or something. So obviously, if my ex is out with one of the kids, I have the other two. This has been a really good thing for the kids, and various friends have copied the idea, even when both parents are still together.

As I said, I didn't even really think about what would happen after. I just felt like it was the end of my life as I knew it. And kind of, it was. But it was also the start of building a new life, one that is much better than I ever imagined. I understand about the difficulty of coping on one's own. Definitely the first year or so was very hard going. Still, I had my lovely bestie who I mentioned. He would come and have dinner with us, and help sooth the bumps through the bed-time routine, and listen while I unloaded on him.

My parents and my sisters had us over for dinner often even though my sisters still have some ambivalence about matters-gay, I think , and my ex wife had family and friends looking after her. Whenever you come out if you choose to do so , it will be hard, at least for a while. For you. For your wife. For the kids. But as you say, staying is hard too. If you do come out, hopefully the difficulty and pain will represent the start of beating a path though to a happier place.

One view to consider is that the sooner you start, the sooner you will all be able to recover and build a new life. Not everyone manages it easily, for sure, and it can take some time to get to a good place, but most people seem to get there. Hi again everyone. I came close to telling my wife that I am gay last night but I couldn't do it. She was upset and saying she wasn't coping and isn't happy. It wasn't the right time to spring this on her but when will be? I told her that I had been thinking about us separating because we have both been unhappy for a long time.

She got really upset and said that won't help it will make things worse. I know she is scared of me not being there to help. I really am stuck now.

If I bring up my sexuality it's going to look like an excuse to leave and she won't believe me. I know it. I think timing is important, especially with kids involved. Your wife will grieve as will you and one of those stages of grief is anger. I think you've planted the seed right now. Her response has been the typical first stage of grief.


Shock, denial, disbelief. I'm not saying don't follow who you really are - definitely not saying that. What I am saying is small steps because if you are to end your marriage it needs to be mostly amicable for the kid's sake and the for sake of your future relationship with them.

When the Computer Opens the Closet

Consider your own emotional health, consider your wife's emotional health and I think play it by ear just like you have done. I told my wife that I think I'm gay last night. I was so nervous but she knew something was wrong and got it out of me. She thought I was having an affair with another woman. I told her she couldn't be more wrong.

She didn't say a lot. I think she was shocked and saddened. She asked what does this mean for us? I told her I don't know at the moment. And that is the truth. I have no idea what I am going to do. I'm seeing a counselor in 2 weeks and am hoping to start working it all out. 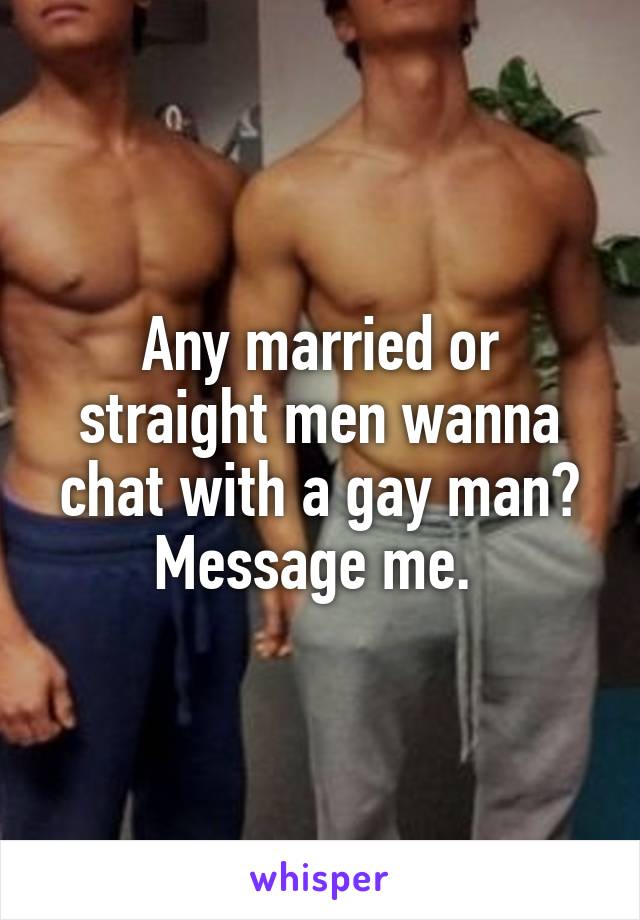 I am confused and really worried how it will turn out. You did it, there is some relief in that. I think you are right to take your time, there is no knowing exactly where to go from here. It seems that both of you will need to do lots more talking. Dr Tom's story is a good one. My ex went back to his wife after being with me, they are actually quite happy together, probably more so now she knows about him.

It is definitely easier for the kids when they are talking and not fighting. I guess having watched a man I love figure all this out, I'd say the best thing is to think about what you want life to be like, talk to your wife about her view of the future too. Keep on talking. Hopefully you can find a way that works out for the best like Dr Tom or my ex have done. There is nothing wrong with being gay either. When you feel comfortable enough to share this with your family start slowly.

Your family and friends may be shocked, feel grief and go through a process of denial. Some may deal betrayed. BUT it is up to you to decide who, how and when and if to tell anyone else. You control this situation. I am 48 and came out recently. There were some people who took umbrage, but it was about me, not them.

For my own mental health I decided come out. First to some gay friends.